Our grandest and most glamorous safari. Each camp has been carefully selected to bring you into close and comfortable contact with some of Africa’s richest game lands and most striking landscapes.

We have hand-picked East Africa’s most luxurious tented camps and lodges including the Four Seasons Safari Lodge Serengeti, the Ngorongoro Crater Lodge, Tortilis Camp and Lewa Safari Camp. On this adventure you can expect guided rhino treks, hot-air ballooning over the Maasai Mara, canopy walks in the treetops of Ngare Ndare Forest and horseback or camel back riding.

This safari visits unique and incomparable ecosystems – Amboseli, in the foothills of Mount Kilimanjaro; the Lewa Conservancy in the Laikipia Plateau, the famed Serengeti and Maasai Mara and the lost world of the Ngorongoro Crater.

The Micato Grand Safari has six internal bush flights to make travel between the luxury camps a seamless, time-saving journey, as well as the added benefit of seeing East Africa’s spectacular landscape from the air. 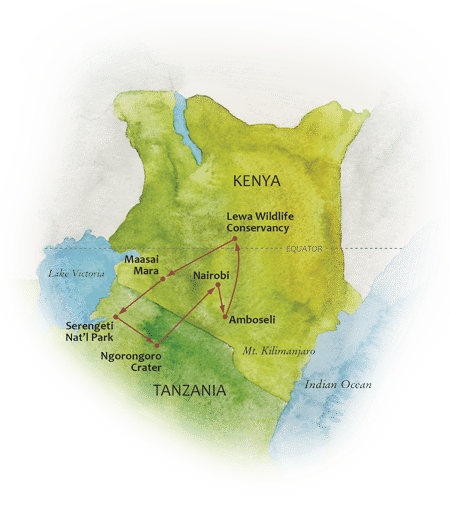 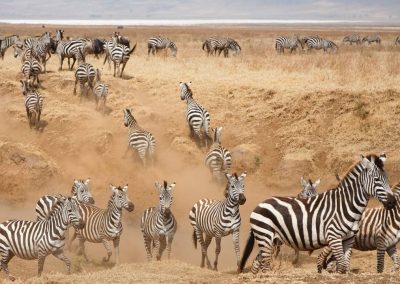 The Great Migration of Zebras through the Serengati and Mara 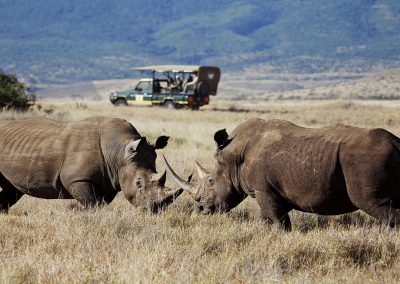 Laikipia is the best place to see Black Rhino’s 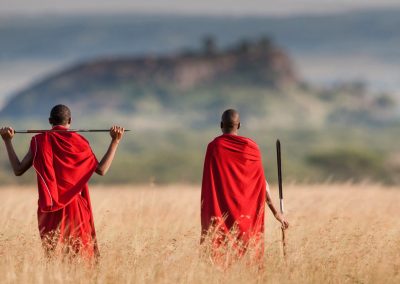 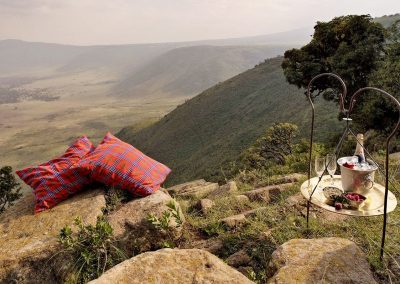 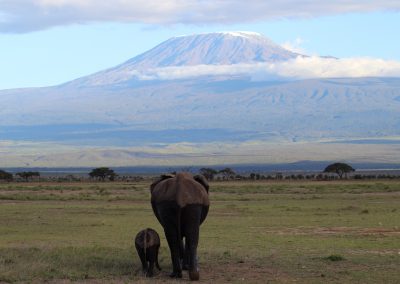 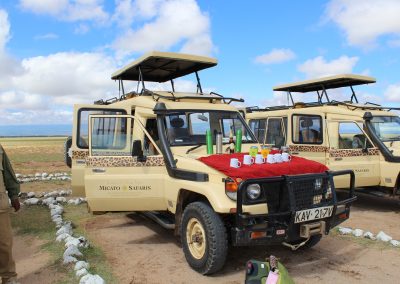 Tea breaks on your bush drives 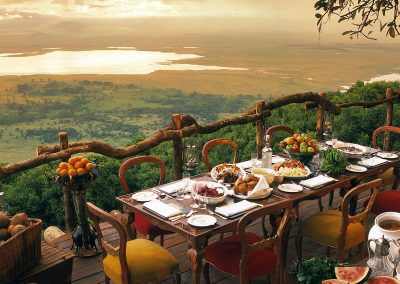 Breakfast with a View at Ngorongoro Crater Lodge 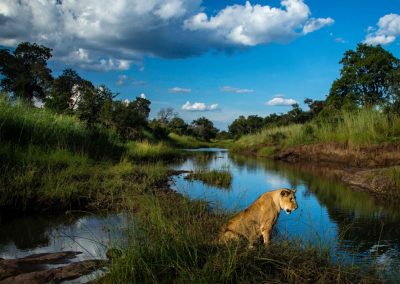 The Big 5 are a guaranteed sighting in the Serengeti 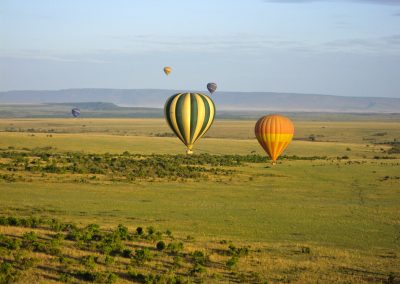 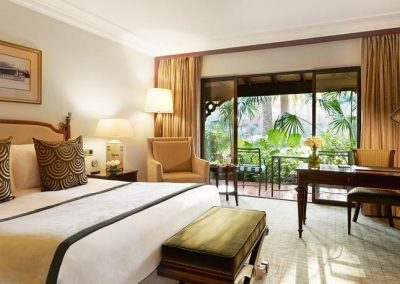 Kick off with a couple of nights at Hemingways – the perfect place to relax after your flight from home. Your first day will be spent visiting the National Museum and the Giraffe Centre, before stopping for lunch with Micato Safari founders Felix & Jane Pinto. Learn all about the history of the company, as well as their extremely interesting lives before embarking on your safari. 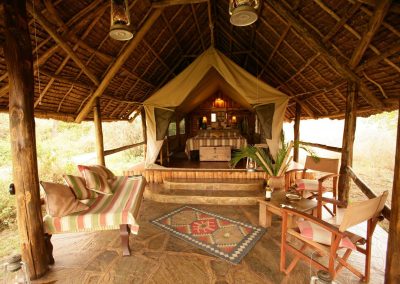 You will take a short flight to Amboseli National Park, a reserve in the shadows of Mount Kilimanjaro that is renown for its elephant population. Here you will spend two nights in the gorgeous and airy Tortilis Camp. Your days here will be spent exploring this incomparably animal-rich kingdom on game drives as well as visiting a traditional Maasai village. 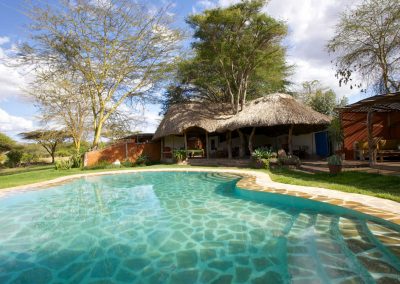 A short flight north takes you onto your next adventure – the Laikipia Plateau. You’ll spend two nights at Lewa Safari Camp in the famous Lewa Conservancy. The Lewa Conservancy has helped create the template for a successful conservancy model of wildlife and habitat preservation. It is the home to the world’s largest concentration of the Grevy’s zebra, as well as its 130 black and white rhino. 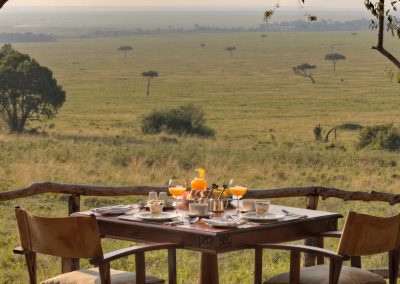 A scenic flight over the Great Rift Valley will take you to the Maasai Mara where you either stay at Bateleur Camp or Governor’s Il Moran Camp. The first day will be spent on safari game drives and learning about the Maasai tribes. The second day you’ll get to experience Africa from the sky by taking a morning’s hot air balloon over the plains before landing to a champagne breakfast! 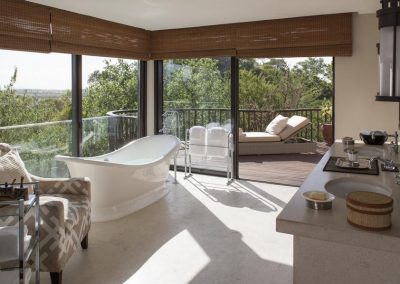 It’s then south into Tanzania (flying via Nairobi and Arusha) to the Serengeti; home to more than three million mammals. You will spend two nights in either the Four Seasons Safari Lodge or the Grumeti Serengeti Tented Camp. Days will involve invigorating game drives, as you spy on the African wildlife; ticking off the Big Five as you go. 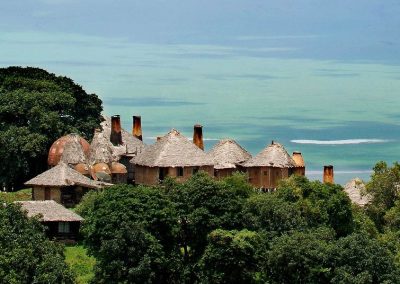 From the Serengeti you will drive east to the Ngorongoro Crater for some more incredible game viewing (it is home to the tree-climbing lions as well as the Big Five). Your final two nights will be spent at the Ngorongoro Crater Lodge which is perched on the rainforest edge – the landscape here is renowned for being phenomenal. 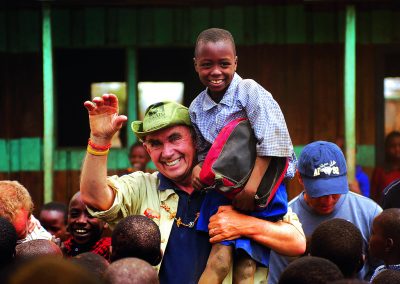 A short flight back to Nairobi where you’ll have a day room at either Hemingways or Boma Hotel draws the journey to a close. During the day, you can visit the rewarding Micato-AmericaShare Harambee Centre where you will meet some of the children from Micato’s One for One Commitment Programme (highly recommended), go shopping or just relax  before your flight back home later that evening.

BACK TO AFRICA
REQUEST A BROCHURE
BESPOKE AFRICA

Thanks to Micato, my family and I enjoyed a trip we will never forget. We could not have asked for a friendlier, more knowledgeable team. It was truly an adventure of a lifetime.
– Cal Ripken